A memorial service was took place in New York City and in Bangalore, India. Rohina’s ashes were brought to a sacred river where Rohina’s soul and life energy  were given back to the Universe. 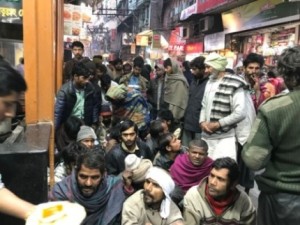 For those wishing to partake in her legacy of giving, we ask that a donation be mad, in her name,  to save and protect endangered animals in South Africa.

Rohina her family and I most appreciate the outpouring of love, kindness and support shown by all.

On the day of her funeral it snowed. How appropriate that the heavens above opened, showering us with such gentle beauty. The tears of God and Angels expressed sorrow for our tragic loss.

A loss that leaves us profoundly empty and questioning the meaning of life itself.

Those above are mourning our loss, but telling us in ways I do not yet comprehend that Rohina’s amazing Spirit is with them and that they promise to love her, as we did and always will.
Rohina has returned to her Birthplace; her home of cultural roots and spirituality, although, in actuality she always held India dear to her heart.
I am told that the “Gita”, tells us that the body is but a vessel to transport an eternal soul.

The soul that shines within is never Born, and exists for all Eternity.

Rohina’s pure energy is and will always be felt by those who loved her and, indeed, she loved so much in return.

The flame of joy that burnt within her brought warmth to all who were within her presence. All who even set their eyes upon Rohina were rewarded with her smile and a laugh that glowed with an intensity that even the Sun was jealous of.

Rohina is the brightest star in the Universe. Similar to a precious Diamond, (at a minimum) 5 caret of course. The unique facets of her life are captured and reflect for all to see her vitality and brilliance.
Her life is and was a beautiful mosaic, encompassing family, friends, work, where she reached the pinnacle of success and of course the adventures. But most of all love – Who did not adore and love Rohina? And she so loved in return!!

Where to commence and more importantly what to reveal about Rohina’s short but stellar life is so very, very difficult.

We all know that Rohina’s Spirit soared as high as the tallest mountains. A smile that showed such Brilliance that one would have to wear sunglasses.

Rohina was indomitable. Once she set her mind to proceed it would be a Herculean Task to alter her direction. I tried many a time, only to find that her giggle and touch dissuaded me.

Those who knew her, or were touched by her magical presence, felt her warmth and deep compassion.

Simba; our Golden Retriever is and will always be her child. She traveled to Buffalo where she fell in love with him.

Love at first sight was not lost on them both. Simba required surgery to keep him healthy. Rohina with her marvelous ways found a surgeon and made him whole.

The two had been literally joined at the soul ever since. His mere presence conjures up the deepest feelings of love. And he responds in kind. A mother – child love that is immeasurable!

He knows he has lost his mother. She told me upon our meeting that they were a package and as such I adopted him.
Her compassion for animals was profound. Crying at the mere sight of an injured creature.

Everyone has asked how we met. A mutual friend arranged this for us. She showed up on our first meeting and I must note it was not “a date”, adorned in a pink dress with much glitter. As for myself, I came straight from the beach in shorts and covered in sand.

Despite my lack of propriety, she saw something in me that allowed me to know her, while she overlooked my faults then and evermore. How fortunate for me. Rohina’s goodness prevented her from holding grudges- instead she would laugh and smile.

Likewise, Friendship was not only important to Rohina but also indelibly etched into her soul.

She studied the meaning of life and sought to capture the spiritual nature of its meaning. Growing up in India, Rohina was exposed to a deeper sense of what it is all about.

Part of this quest to obtain spiritual purity was friendship.
Her friends knew that they could and would always be able to count on Rohina to be there for them.

There was never a doubt in their mind that Rohina would find a way to assist.

She collected and cherished friends like most of us would gather rare stamps. We traveled to many places in the world together. My idea of a vacation was to just be with her.

Rohina’s path was to befriend all in sight and those not yet visible. The managers of the most prestigious hotels and restaurants flocked to her side as if a magnet were attracting them.

There was no refusing her and all she had to do is just be herself. Rohina’s charm did the rest.

On our travels Rohina would offer her card to strangers and then suggest that if in the NYC area, to visit and even stay with her.
I would protest these offers, but she just retorted that “you will be with me and this is the Indian way” or perhaps it was just her way.

Her travels took her to the most distant corners of the Earth. She enjoyed devouring travel books and planned each trip with exquisite precision. I knew that all I had to do was show up at the Airport – and of course wait an extra 15 minutes for her to show, and then we were off to enjoy another incredible adventure.

She climbed the Himalayas, although to this day I still felt that a Sherpa carried her.

Bhutan found her climbing thousands of stairs to reach the monastery. She loved to see the world in all its glory. On another venture that she set up –we actually ‘swam with the Pigs‘.
Real pigs that swim, mind you. While there, her sunglasses; of a golden hue, (which paled in contrast to her complexion), suddenly dropped into the sea.

Rohina, nonplussed convinced the crew to dive from the boat to find them for her. In they went, as we all fell to her allure, until they found her glasses.
I remember her African adventure with the Duke of Edinburgh Foundation; of which she was on the Board and run by Prince Edward; whom she knew personally. As well as President Bush the second; who called her “sweetie”. She introduced me to him as a Democrat!

While in South Africa with the Prince she was always afforded the seat next to him and his wife during dinners, while I was, due to royal protocol, relegated to the kitchen.

Once, I protested that we were separated during dinners and she proceeded to note that they were Royalty, after all. However, her sweet goodness came through, and she did inquire if this could be altered. We remained apart; however.

I explained to her that it was not the placement of my seat that I protest, but rather that I could not be at her side and hold her hand. It was never about the travel, but about being with Rohina.

Everyone wished to feel the warmth of her glow, the excitement and energy that personified Rohina.

She relished the excitement of underwater diving. Having conquered the Galapagos and with the Maldives near India, in her sites as my birthday gift this summer. She set her mind on an adventure in Costa Rica.

For dearest Rohina, the thrill of swimming with sharks was one she could not resist. And indeed from what I am told from the other divers on the trip with her, that Rohina was thrilled to be there and having so much fun.

The world now knows how this foray turned into a heart-breaking event for her mother, brother, family, and friends and for me. One that has rocked the very balance of the Universe.
But Rohina was in all ways larger than life itself. She adored glitter, the sparkle of jewelry and even had writing books that flickered with gold dust.

Her dress style was couture to jeans. Her beautiful face, flashing eyes that glowed and of course her aura made all clothing that much lovelier.

I must admit that the suitcase she chose on trips was quite heavy. But even so Rohina managed to easily secure assistance in moving this enormous object. No one could resist her.

Rohina had taken French culinary lessons and was proficient at French cooking, many of her friends have noted for me. However, she denied having these abilities. “Why cook when in NYC, when we can have any food simply by dialing?”

Over the past months I was fortunate to have her more often with me in Connecticut.
Like all else she set her mind upon to accomplish, Rohina started to cook as well as brush up on her driving skills.

Often a large box would be placed upon the doorstep containing many of the ingredients to accomplish the making of a gourmet dinner. How lucky was I to go from grilling food to eating like a King.

Our plans to spend a greater amount of time in Connecticut required Rohina to master the art of driving. Like all else she set her mind to accomplish, Rohina unabashedly took the wheel and worked diligently to perfect this skill.

Rohina’s life cannot be categorized easily. Presidents knew her, Ambassadors weep over the loss, but she never was anything but down to Earth.

She showed me how to love, how to be free to laugh at life. To find goodness and seek happiness.

Her beauty was so much more than a mere superficial outward visage.
It was a deep commitment to the joy of life. A freedom that brought her to my arms and to those of her family and friends.

Often we say how spiritual someone is, but Romina’s essence was pure. It was a guiding light to bask in.

Her joie de vivre flowed like a rushing river that engulfed everyone she touched, making them so much better off for knowing her.

Romina’s ripples of joy are everywhere. There is much that I encounter daily which reminds me of how deep is our loss. I see and hear her voice in all I do.
It is obvious that I could speak volumes about Rohina and her life. In a mere 49 years, she lived a full life.
There is never an end point.
The laughter, joy, warmth and love that she has shown to all will not be lost nor forgotten. Her touch, so deep, will reside in our hearts for all time as it is indelibly etched for eternity.
When you look above to the night sky, Rohina will always be the brightest light above, as she was when with us.
Her exuberance for life and desire to pursue that which mere mortal man or woman could never do is who our Rohina is and will always be.

I thank you for being here today with Rohina and ask for you to not mourn her Death but rather Celebrate her Life.

A life so rich and so giving that we cannot but feel her presence. Rohina left us much too early. December 8th is and will always be her birthday. A day to celebrate, for as long as we take a breath. For if Rohina, my dearest, were not born, we would never have basked in her brilliance. Nor known her love.

I can only say that God will have his hands full and know that he is now enjoying Rohina, as we all did. She is smiling upon us and will always be in our hearts.